But this is no televised championship, with its own rules and regulations.

There are no pretty flags or set race tracks in these street races.

I began to believe such a man could never love a girl like me, but love me he does… all of me … and there are plenty of my fuller-plus-size figured curves to love.

Together we stand strong at the head of his exotic car racing dynasty, but there is darkness brewing.

As fate would have it, regrets collect like old friends ready to relive his most agonizing moments.

Dark secrets are awakened, whispering their threats of destruction.

Will they be enough to take us down?

The moment arises for him to decide who is more important.

Me or his brotherhood of racing league members?

This is where our legacy with the world’s fastest cars begins.

Due to strong language and graphic sexual content, this book is not intended for readers under the age of 18. 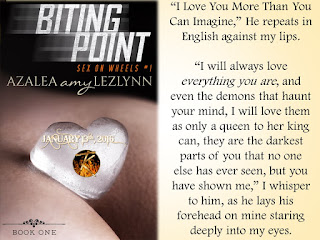 “You can’t run from Destiny…All Roads Lead to the same destination.” – I live by this self-made motto.
I’m addicted to Italian Ice-Cream & Exotic Fast Cars *this will be made VERY clear in my book*
I am plus size full figured girl and so is my leading lady in my debut novel.Single, 29 years of age, I am the middle sibling to an older brother and a younger sister.
I am loud, funny and I have no shame in life.
I read dark themed novels or extreme alpha male storylines & BDSM and I like to indulge is hardcore M.C Books & there is very particular Rockstar Series that I love!!! I am addicted to music more than the average human should be. I cannot live without it especially 90’s music. I first started writing at the age of 13 years old where I had won awards in school for my writing skills and original storylines.
Such as the one in my debut series – “SEX ON WHEELS” : Biting Point + Driven Deeper + Ridden Rougher all to be released in 2016.