He hurt me
He broke me
He almost destroyed me
Nobody was ever going to do that to me again. I learnt to fight back. I made myself tougher, harder, stronger. I didn’t want or need anyone.
Until Nate Masters.
Until he made me feel, want and need
Then my carefully constructed world began falling apart around me. Secrets shattering my faith in those closest to me and with the nightmare from my past pushing its way back into my present, I don’t know how much strength I have left to fight with…
Could I trust him? Give someone the power to hurt me again? He’s determined to break me free from behind my walls of self preservation
I’m just not sure I’m ready or willing to be Freed by Him….

***Due to possible ‘triggers’ and adult nature of this book it is not intended for those under 18. 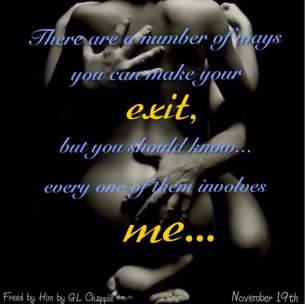 “I’m capable of taking care of myself, you know!”
He smirked at me looking amused. “Sweetheart, I’ve seen you in action so that’s not up for debate, but no fucker is gonna put his hands on you like that when I’m around.”
I lifted my chin at him in defiance. “What’s it gotta do with you?” I sounded like a petulant teenager, but he just grinned at me, his arrogance riling me up further. “We’ll see”
He pushed me back toward the table before addressing Christian and Maddie, “I’m gonna take her home.” He indicated at me with a jerk of his head and I exploded, my temper finally getting its release after the arsehole on the dancefloor.
“Excuse me! I’m right here! I’ll go home when I damn well please, not when you say, who the bloody hell do you think you are!” He grinned at me and rolled his eyes, infuriating me almost to the point of combustion.
Maddie pulled herself upright into a sitting position, trying to extricate herself from Christian’s grasp. “We’re going now too. C’mon Lee I’ll come as well” Maddie tried to pacify me but Nate shook his head.
“You guys stay, or go together. Whatever,” He shrugged. “I’m taking Lena”
Maddie’s eyes flicked to me uncertainly as I looked at him stunned, trying to think of a response more eloquent than “Fuck off!”
Maddie started to speak, but Christian whispered in her ear just as Nate cut her off. “It’s not a request. I’ll have her text you”
His playfulness from earlier had been replaced by a cool confident authority. I gaped at him as he spoke to her. As he turned back to me I met him with a face like thunder, which caused a huge grin to break across his face again.
I glanced back at Maddie for help, expecting her to be outraged at Nate’s behaviour but she was smirking at me, looking somewhat impressed with him. Trust her to be taken in with the caveman behaviour.
I felt like stamping my foot and shouting. This is not how I was used to being treated. This was not how I allowed myself to be treated. I was a grown woman of nearly 25; I did what I wanted when I wanted. I was practically running a company for God’s sake.
As if sensing my newfound resolve Nate cocked an eyebrow at me a small smile playing on his lips as he leaned in “Don’t make me throw you over my shoulders Princess. There are a number of ways you can make your exit but you should know every one of them involves me” He winked at me looking relaxed, an arrogant smirk on his face. I scowled back but allowed him to lead me from the bar.
The cold night air hit me and I realised how unsteady on my feet I felt.
He was beside me in an instant. “If I’d have known I’d be taking you home I’d have brought a jacket” He said with a smile as he gently rubbed my arms before wrapping his own around me in a warm embrace.
I stood tucked inside his arms, my back pressed close to his chest while we waited for a taxi. “If I’d known you’d be taking me home I’d have stayed in,” I quipped back and he laughed, a deep rumbling sound that had me grinning in spite of myself.

I’m currently a SAHM to two little ones. I live in Wales in the UK and spend a huge amount of time at the beach, despite our climate…
I don’t drink any hot drinks despite trying my best to make myself like coffee! I love reading – obviously, writing and music, and hot sunny days which we never get enough of!
I’ve dreamed of writing my whole life and would often pen short stories as a child. Unfortunately, life took over and reading and writing were forced to take a back seat for the last few years. Until my husband bought me a kindle last Christmas, and well, suddenly everything changed…